Shortly before Eid, my colleague came across a study by Wing VC about the changing nature of early stage funding for tech startups in Silicon Valley. It is their third annual study on this topic, based on funding raised by early stage tech companies from one of 21 top venture firms over 10 years. We thought a commentary on the study would be a fitting start to our blog, as Pakistani startups – often founded by brilliant engineering minds – struggle to navigate the strange world of fundraising, especially from Valley based firms. And that struggle has gotten harder over the last few months due to covid-19.

This is part 1 of a two part series. Part 1 describes the trends in early stage funding and explains the underlying reasons behind those trends. In part 2 we talk about what all this means for Pakistani startups, followed by our (somewhat contrarian) views on how covid-19 will impact the funding and startup landscape.

First, a summary of the most interesting and relevant findings until 2019, right before covid-19 hit us. 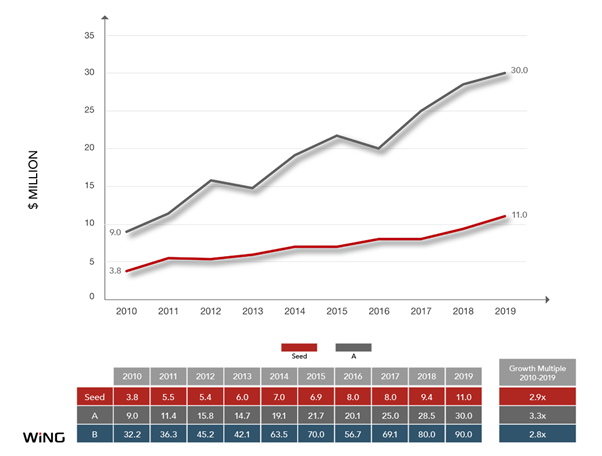 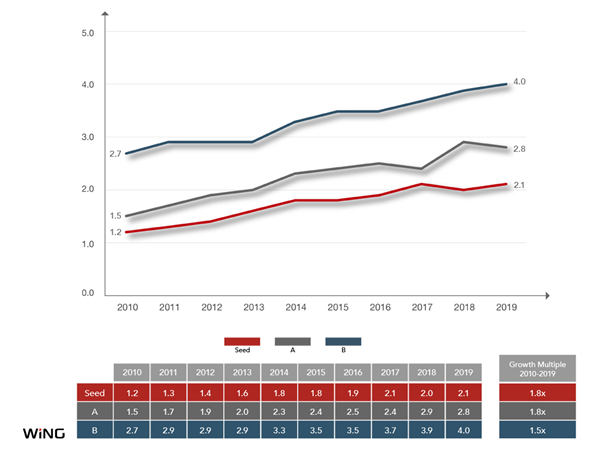 Another very significant finding is that fundraising before generating revenue is becoming rare. In 2019, 67% of companies raising their Seed round were already generating revenue. At Series A, 77% of startups were revenue generating, and the number was 92% at the Series B stage.

So what lies behind these trends?

Firstly, starting up has become much cheaper over the last decade and a half due to, among other factors, the rise of open source software, affordable cloud infrastructure (IaaS, PaaS, SaaS), cheap digital marketing channels to reach customers, and hardware getting cheaper and continuing to follow Moore’s Law. So startups can survive longer on their small pre-seed and angel rounds, using these to develop their MVPs, start earning revenue and achieve some customer validation before going on to raise their larger seed rounds at better terms.

The last decade also saw some very large exits of venture backed startups, amplifying the allure of large payoffs in IPOs or acquisitions and fueling nearly unprecedented optimism in tech. This, in turn, boosted valuations and caused seed firms and VCs to invest larger amounts to acquire their minimum desired equity stake. And it is not that valuations have increased only because rounds have been delayed and startups at each round are maturer; valuation multiples at the Series A and B stages have gone up too, meaning investors receive less equity for each dollar invested. The figure below, from Bessemer’s State of the Cloud 2018 report, shows how average revenue multiples for private cloud startups went up from 6.9x in 2011 to 15.9x in 2017.

It is also important to note that in 2010 we were very early in a recovery from the financial crisis, whereas in 2019 we were very far along in an unprecedented bull cycle, so it was natural for valuations to increase given the economic cycle, as more and more money chased good deals.

Another interesting thing that has happened in the last few years is that metrics for assessing engagement, traction and financial effectiveness of startups (e.g. CAC, LTV, active users, churn etc.) have become popular, especially for SaaS startups as investors have started to understand these better. As opposed to jumping blindly on the hot SaaS opportunity, investors have started applying these metrics as benchmarks to de-risk their investments. As a result, the criteria for investment have become stringent and fewer non-revenue startups have been raising money, both at the Seed and Series A stages.

Where have startups been raising their first cheques from, now that they’re delaying their Seed rounds? VCs, seed firms and microVCs have not entered the pre-seed stages as such, because their business model makes it very difficult for them to increase their portfolio size as they demand board seats in the startups. Thus, they have to rely on making a few investments, and these have to be large enough to give them a good chunk of equity. This is where angel investors step in. They don’t have to worry about the constraints faced by VCs and can make smaller investments for less equity. They invest anywhere from $10K to a few hundred thousand, so startups often close multiple, rolling deals from different angels to reach their fundraising target. Another source of pre-seed funding are accelerators, who can provide up to $150K as a combination of cash and services against equity. Multiple seed rounds are also popular now, explaining the larger gap between Seed and Series A rounds.

Part 2 will talk about what Pakistani founders should make of these trends, and what lies ahead as these trends start to slow down and then reverse.